The Right Way to Use Sunscreen 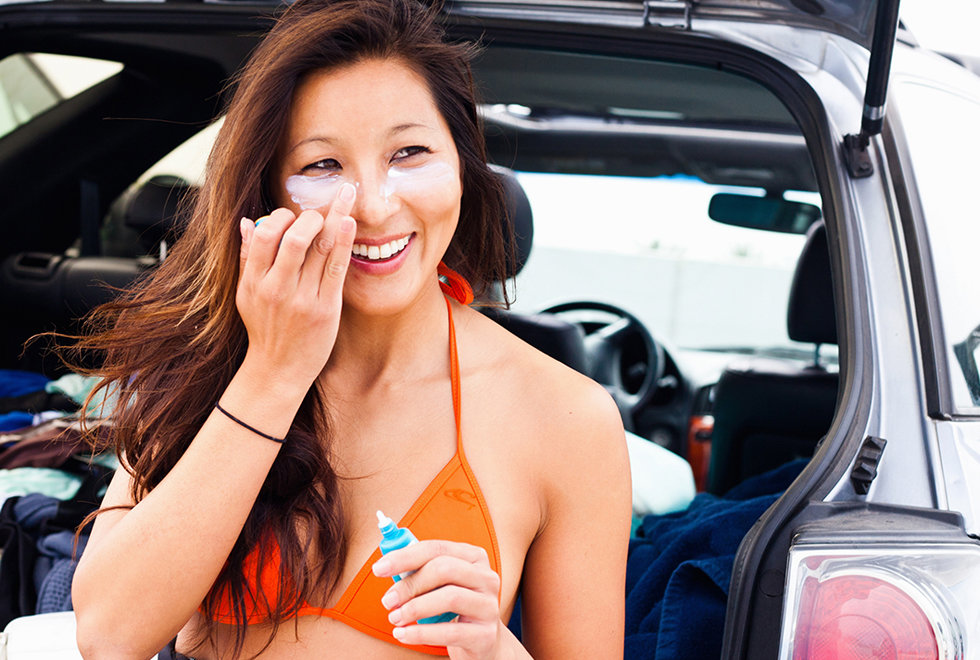 This season, you are probably spending every moment you possibly can outside (remember winter? let’s not). Our skin is exposed and vulnerable more often than we realize—driving around with the windows down, having lunch on a restaurant patio, enjoying a stroll in the park—and exposure to damaging rays is no joke. Putting on sunscreen should be as normal a part of your beauty routine as your favorite mascara.

Now is the time to make sure you’re using the right kind sunscreen and that you’re also using it correctly. Remember, the sun doesn’t have your back, it burns it.

Beware of high numbers.
Cast a wary glance at sunscreens that boast an SPF higher than 50. SPF (or sun protection factor) is basically a number that translates to how long you can stay exposed to the sun without burning. For example, SPF of 15 means that it will take 15 times as long for your skin to burn. When the number gets to over 50, that’s where the rule doesn’t apply. An SPF of 30 to 50 is adequate enough.

Look for “broad spectrum” formulas.
Did you know that there are two types of rays that the sun emits? They are UVA and UVB. UVA can damage skin on a more deeper level, while UVB is the ray that causes sunburns. Broad spectrum sunscreens protect against both UVA and UVB rays. Try: Eve Lom Daily Protection Broad Spectrum SPF 50 Sunscreen.

How much to use.
You know how it’s recommended to use a quarter-sized amount of shampoo when washing your hair? With sunscreen it’s the opposite. You’ll want to use an ounce, which equals out to about the size of a shot glass.

When to put it on.
Your skin needs to soak up the sunscreen in order to give proper protection. You can’t just slap some on and immediately run outside! Apply the lotion about 15 to 30 minutes prior to stepping out in the world.

Put in on everywhere.
You’ll want to make sure you get all of your body’s exposed areas. Watch out for the back of your neck, shoulders, chest, ears and even your hands!

Don’t forget to reapply.
Even if a sunscreen is waterproof, it can still be wiped off with a towel or come off when sweating. Make sure to reapply every couple of hours. If you’re in the pool, reapply as soon as you get out.

Your pucker needs protection too.
News flash: lips can fall victim to sun damage too, and sunburned lips are a hell all its own. Protect them with a lip balm that contains SPF. WANT more respect, trust and affection from your co-workers?

Wearing makeup — but not gobs of Gaga-conspicuous makeup — apparently can help. It increases people’s perceptions of a woman’s likability, her competence and (provided she does not overdo it) her trustworthiness, according to a new study, which also confirmed what is obvious: that cosmetics boost a woman’s attractiveness.

It has long been known that symmetrical faces are considered more comely, and that people assume that handsome folks are intelligent and good. There is also some evidence that women feel more confident when wearing makeup, a kind of placebo effect, said Nancy Etcoff, the study’s lead author and an assistant clinical professor of psychology at Harvard University (yes, scholars there study eyeshadow as well as stem cells). But no research, till now, has given makeup credit for people inferring that a woman was capable, reliable and amiable.

The study was paid for by Procter & Gamble, which sells CoverGirl and Dolce & Gabbana makeup, but researchers like Professor Etcoff and others from Boston University and the Dana-Farber Cancer Institute were responsible for its design and execution.

One hundred forty-nine adults (including 61 men) judged the pictures for 250 milliseconds each, enough time to make a snap judgment. Then 119 different adults (including 30 men) were given unlimited time to look at the same faces.

The participants judged women made up in varying intensities of luminance contrast (fancy words for how much eyes and lips stand out compared with skin) as more competent than barefaced women, whether they had a quick glance or a longer inspection.

“I’m a little surprised that the relationship held for even the glamour look,” said Richard Russell, an assistant professor of psychology at Gettysburg College in Gettysburg, Pa. “If I call to mind a heavily competent woman like, say, Hillary Clinton, I don’t think of a lot of makeup. Then again, she’s often onstage so for all I know she is wearing a lot.”

However, the glamour look wasn’t all roses.

“If you wear a glam look, you should know you look very attractive” at quick glance, said Professor Etcoff, the author of “Survival of the Prettiest” (Doubleday, 1999), which argued that the pursuit of beauty is a biological as well as a cultural imperative. But over time, “there may be a lowering of trust, so if you are in a situation where you need to be a trusted source, perhaps you should choose a different look.”

Just as boardroom attire differs from what you would wear to a nightclub, so can makeup be chosen strategically depending on the agenda.

“There are times when you want to give a powerful ‘I’m in charge here’ kind of impression, and women shouldn’t be afraid to do that,” by, say, using a deeper lip color that could look shiny, increasing luminosity, said Sarah Vickery, another author of the study and a Procter & Gamble scientist. “Other times you want to give off a more balanced, more collaborative appeal.”

In that case, she suggested, opt for lip tones that are light to moderate in color saturation, providing contrast to facial skin, but not being too glossy.

But some women did not view the study’s findings as progress.

“I don’t wear makeup, nor do I wish to spend 20 minutes applying it,” said Deborah Rhode, a law professor at Stanford University who wrote “The Beauty Bias” (Oxford University Press, 2010), which details how appearance unjustly affects some workers. “The quality of my teaching shouldn’t depend on the color of my lipstick or whether I’ve got mascara on.”

She is no “beauty basher,” she said. “I’m against our preoccupation, and how judgments about attractiveness spill over into judgments about competence and job performance. We like individuals in the job market to be judged on the basis of competence, not cosmetics.”

But Professor Etcoff argued that there has been a cultural shift in ideas about self adornment, including makeup. “Twenty or 30 years ago, if you got dressed up, it was simply to please men, or it was something you were doing because society demands it,” she said. “Women and feminists today see this is their own choice, and it may be an effective tool.”

Dr. Vickery, whose Ph.D. is in chemistry, added that cosmetics “can significantly change how people see you, how smart people think you are on first impression, or how warm and approachable, and that look is completely within a woman’s control, when there are so many things you cannot control.”

Bobbi Brown, the founder of her namesake cosmetics line, suggested that focusing on others’ perceptions misses the point of what makes makeup powerful.

“We are able to transform ourselves, not only how we are perceived, but how we feel,” she said.

Ms. Brown also said that the wrong color on a subject may have caused some testers to conclude that women with high-contrasting makeup were more “untrustworthy.” “People will have a bad reaction if it’s not the right color, not the right texture, or if the makeup is not enhancing your natural beauty,” she said.

Professor Hamermesh, the author of “Beauty Pays” (Princeton University Press, 2011), which lays out the leg-up the beautiful get, said he wished that good-looking people were not treated differently, but said he was a realist.

“Like any other thing that society rewards, people will take advantage of it,” he said of makeup’s benefits. “I’m an economist, so I say, why not? But I wish society didn’t reward this. I think we’d be a fairer world if beauty were not rewarded, but it is.” How To Determine Your Skin Type

Do You Know Your Skin Type? Does not produce enough oil.

Has a good oil/water balance.

*If you can see follicle size changing from medium to smaller just on the edge of the T-zone.

Can be both oily & dry at the same time.

-over cleansing can make it worse by stripping & irritating the skin.

-redness & is easily irritated by products & exposure to sun